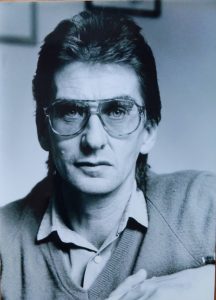 The son and grandson of miners, Barry Hines (1939–2016) was born in the mining village of Hoyland Common, near Barnsley, South Yorkshire. He attended Ecclesfield Grammar School, on the edge of nearby Sheffield, where he played football so well that he was offered trials for Manchester United, played in the reserves at Barnsley, and represented England in a School Week XI (effectively a national Grammar School Boys team) in a 3–0 loss to Scotland, an experience which enabled him to see ‘the class system close up’, and ‘to place football into some kind of social perspective’. Despite attending a grammar school, he worked first as an apprentice mining surveyor for the National Coal Board before a miner-neighbour’s admonishment to ‘use his brains’ led him to go to college to study Physical Education. He worked as a PE teacher for several years, first in London and later in South Yorkshire, where he wrote novels in the school library after the children had gone home.

He would go on to become a full-time writer, publishing nine novels and writing screenplays for film and television. Hines was often considered to be part of the generation of celebrated Northern writers including Alan Sillitoe, Stan Barstow, John Braine and Keith Waterhouse, though he was a decade younger than most of them. His debut book, The Blinder (1966), was one of the first novels about football. He followed it with a series of novels reflecting the lives of the proletariat: A Kestrel for a Knave (1968), an immediate bestseller when published in Great Britain in 1968; First Signs (1972); The Gamekeeper (1975); The Price of Coal (1979); Looks and Smiles (1981); Unfinished Business (1983); The Heart of It (1994); and Elvis Over England (1998). By 2002, he had finished the manuscript of a final novel, Springwood Stars, a story of a football team in a mining village during a 1920s miners’ strike. Never published, And Other Stories will publish Springwood Stars in 2024, as well as bringing other Hines’ classics back into print over the coming years.

Four of his books – A Kestrel for a Knave, The Gamekeeper, The Price of Coal and Looks and Smiles – were adapted for the screen by Hines and filmed by Ken Loach. Hines is still best known for A Kestrel for a Knave, which became the film Kes, regarded as one of the great classics of British cinema. Hines also wrote other successful television and radio plays, including the script to the BAFTA award-winning film Threads (1984), a speculative television drama examining the effects of nuclear war on Sheffield, which remains a terrifying and beloved example of its genre.

‘The purpose of [the gamekeeper’s] life is absurd . . . Marginally, in the vitality of some of the wild birds or animals around him the gamekeeper deposits his minimal belief that life has another dimension . . . An outstanding book, which I read with admiration.’

‘His ear for the dialect and its comedy was pitch perfect . . . Barry understood class politics, the irreconcilable conflict between workers and employers. His book The Gamekeeper, which we filmed, captured this exactly. The title character is an ex-steel worker who now protects the land of the aristocracy and chases off his former workmates. A life in the open air for him means social exclusion for his wife and family. Is he changing sides or swapping one form of exploitation for another? Barry loved such contradictions.’

‘The feel and texture of country working-class life can seldom have been more faithfully recorded than they are here . . . I think this book has a quiet kind of value, easily missed, worthy of any reader's patience.’

‘He has a very rare quality of loaded simplicity, a kind of eloquent stillness . . . it is the marvellously detailed observation of real unsentimental country life which compels attention as grippingly as any thriller. When bolder, gaudier stuff is long forgotten, Mr Hines’s writing stays in the mind and nourishes it.’

‘The eye and the ear for country matters are as lethal as a crack shot on the Glorious Twelfth.’

‘A powerfully political novel that sidesteps overt polemic, The Gamekeeper observes, with studied neutrality, the beauty and brutality of the natural world and contrasts it with the wilful brutality of the sporting estate. Our hero is, of necessity, a cog in a system that warps the land and those who work it into status symbols. It is a dynamic from which, nearly fifty years on, we still have not escaped. The Gamekeeper is a compelling novel-as-documentary that deserves a new generation of readers.’

‘[The Gamekeeper] slyly evolves into implied criticism of the power imbalance between working-class George and the aristocratic Duke. Hines (1939–2016) skillfully writes in the tradition of such North England writers as Alan Sillitoe and Keith Waterhouse. This offers a convincing take on the strictures of class.’

‘Hines has a keen eye for nature, and his prose is at its finest when describing Purse’s adventures on the lush landscapes, especially his interactions with animals.’