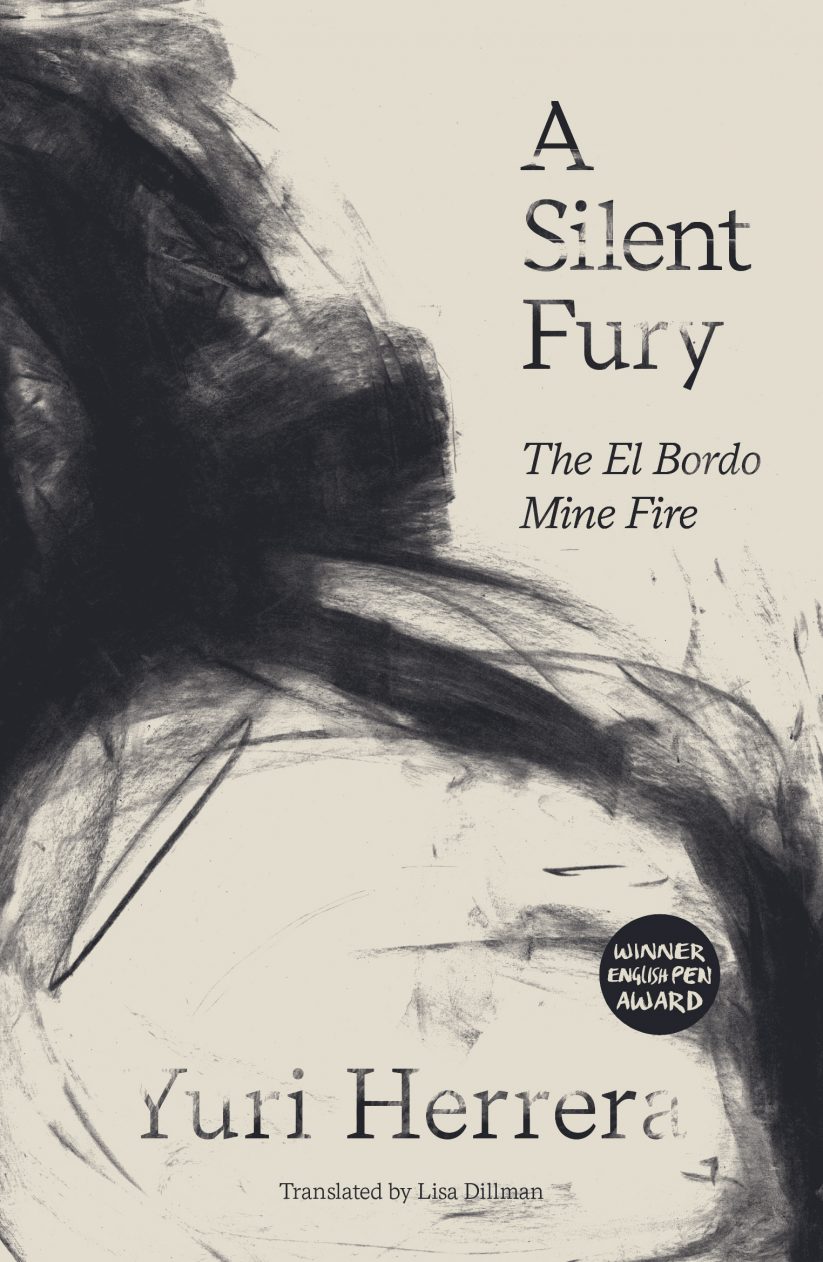 'A searing, painful, poetic, simple, extraordinary book about a 1920 mine disaster. Remembering Grenfell – do we learn?'

'A precise and devastating account that peers into the dark mouths of the El Bordo mine as if they were the gates of hell. In these pages, Yuri Herrera paints a portrait of poverty and neglect and reveals, once again, the way exploitation and abuse lurk at the source of all violence.'

John Gibler, author of I Couldn’t Even Imagine That They Would Kill Us

‘A Silent Fury is a narrative rebellion against the archive of atrocity. Herrera subverts the archive, turns it against itself, upends its silencing mission and reveals within it the traces of corporate and governmental abuse, disregard and murder.’

‘Like Life of a Klansman, Herrera’s book is a microhistory inspired by an absence in the archives. But where Ball enriches the record with context and speculation, Herrera conducts a crisp, matter-of-fact investigation. In quietly seething prose—ably translated by Lisa Dillman—he parses the evasive accounts of contemporary journalists, judges, mine administrators, and civil authorities, noting the implications of each elision and discrepancy. By the end, the “accident” looks more like homicide, a crime quickly covered up by local officials and company bureaucrats who barely saw their workers as human . . . The book is a gripping demonstration of how much can be unearthed from the omissions of official accounts.'

‘By bringing moral exactitude to a story long silenced for American profit, A Silent Fury joins that most vital of canons, the literatures of witness. Reading against the grain of official documents, defining what is there by what is not, Herrera bears witness to a crime that preceded his birth by 50 years.’

Boyd Tonkin
The i

‘Herrera's quietly impassioned account has much to say to movements that now work to reclaim a buried past.’Boyd Tonkin, The i

‘At its heart, this is not a book about a mine or even a fire. It is about blame, and what powerful people do to make it disappear . . . This is a book that demands to be read.’

‘A story that resonates around the world today . . . and in this short book, Herrera tells it with a poetic concision and eye for detail, made all the stronger for the narrative’s measured pace of revelation.’ 5*

'The book reminded me, naturally, of the disaster that is unfolding around us at this moment [COVID, 2020]. Power doesn’t care about the powerless, Herrera shows us; he’s talking about miners a century ago but could as well be talking about a bartender today. Though often beautiful, A Silent Fury is not pleasurable reading; it is, nevertheless, essential.'

'Herrera knows how to plot an intense plot and handle an original style, as capable of revealing a miserable and anguished social reality as well as elevating with poetry the humble and everyday life in order to reach symbolic proportions.'

'What Yuri Herrera does is Literature, beyond genres or labels. He amply proves it again now, after five years of silence, with a fascinating story that reads like a novel.

'With his characteristic sharp prose and exciting rhythm, Herrera is one of the most remarkable writers of Latin America. The El Bordo Mine Fire is an impeccable exercise of journalism.'

‘With his trio of books set in the narco-war borderlands, Herrera has shown that he’s a master of the short, tense fiction, and with A Silent Fury, he proves it further, this time venturing into a more historical mode.’

Booksellers on A Silent Fury

‘A plaque. A press release. A mislabeled photograph. Like a paleontologist drawing a beast from a jawbone, Herrera tells a story of greed, imperialism, and complicity from a few fragments of information. The El Bordo Mine Fire is just one almost forgotten tragedy but, like Rukeyser's Book of the Dead, the bright, poetic light Herrera shines on it with A Silent Fury, casting a shadow on our biggest questions.’ Josh Cook, Porter Square Books

‘Yuri Herrera's slim and devastating A Silent Fury documents the mining tragedy in Pachuca in 1920 and the government and mining company's attempts to cover up the deaths. There is no more relevant time to read about workers' fights for safety and justice in their workplace.’ Tom Flynn, Pilsen Community Books

‘Silence pervades this short book; that of the historical record; that of the the U.S. corporation that owned the mine; that of the survivors; and that of the dead. Herrera is haunted by the silence of the El Bordo mine fire,100 years after 87 miners died, and seeks to record the whispers of ghosts. In this, he is only partly successful, but by attempting to give voice to the silenced, hope is given breath.’ Chapter Books

‘Yuri Herrera explores the history of century-old mine disaster in a small Mexican town. Due to the owner’s influence, the historical record is dubious. Herrera’s investigation raises important questions about how the callousness of the powerful can ensure that a callous history is all that survives them.’ Keith Mosman, Powell's Books

‘A Silent Fury is an astonishing piece of journalism. The story is about the El Bordo mine fire in Pachuca, Mexico, and how, when capital comes before workers, lives are too often lost, and justice too long unserved. My favorite book from Herrera yet, and that is an incredibly high bar to reach.’ Matt Keliher, Subtext

‘An astonishing combination of history, cultural anthropology, and journalism that sheds light on a previously forgotten mining disaster . . .  and a good example of why we need more translated nonfiction.’  Lesley Rains, City of Asylum Bookstore

‘Yuri Herrera is Mexico’s greatest novelist. His spare, poetic narratives and incomparable prose read like epics compacted into a single perfect punch—they ring your bell, your being, your soul.’ Francisco Goldman

‘Yuri Herrera must be a thousand years old. He must have travelled to hell, and heaven, and back again. He must have once been a girl, an animal, a rock, a boy, and a woman. Nothing else explains the vastness of his understanding.’ Valeria Luiselli

‘Herrera’s metaphors grasp the freedom, and the alarming disorientation, of transition and translation.’ Maya Jaggi, The Guardian

‘Herrera packs The Transmigration of Bodies with the sex, booze and nihilism of a better Simenon novella.’ Sam Sacks, Wall Street Journal

'I was captured by Kingdom Cons. His writing style is like nobody else’s, a unique turn of language, a kind of poetic slang . . . seeming to fall in my hands from an alternative sky.' Patti Smith