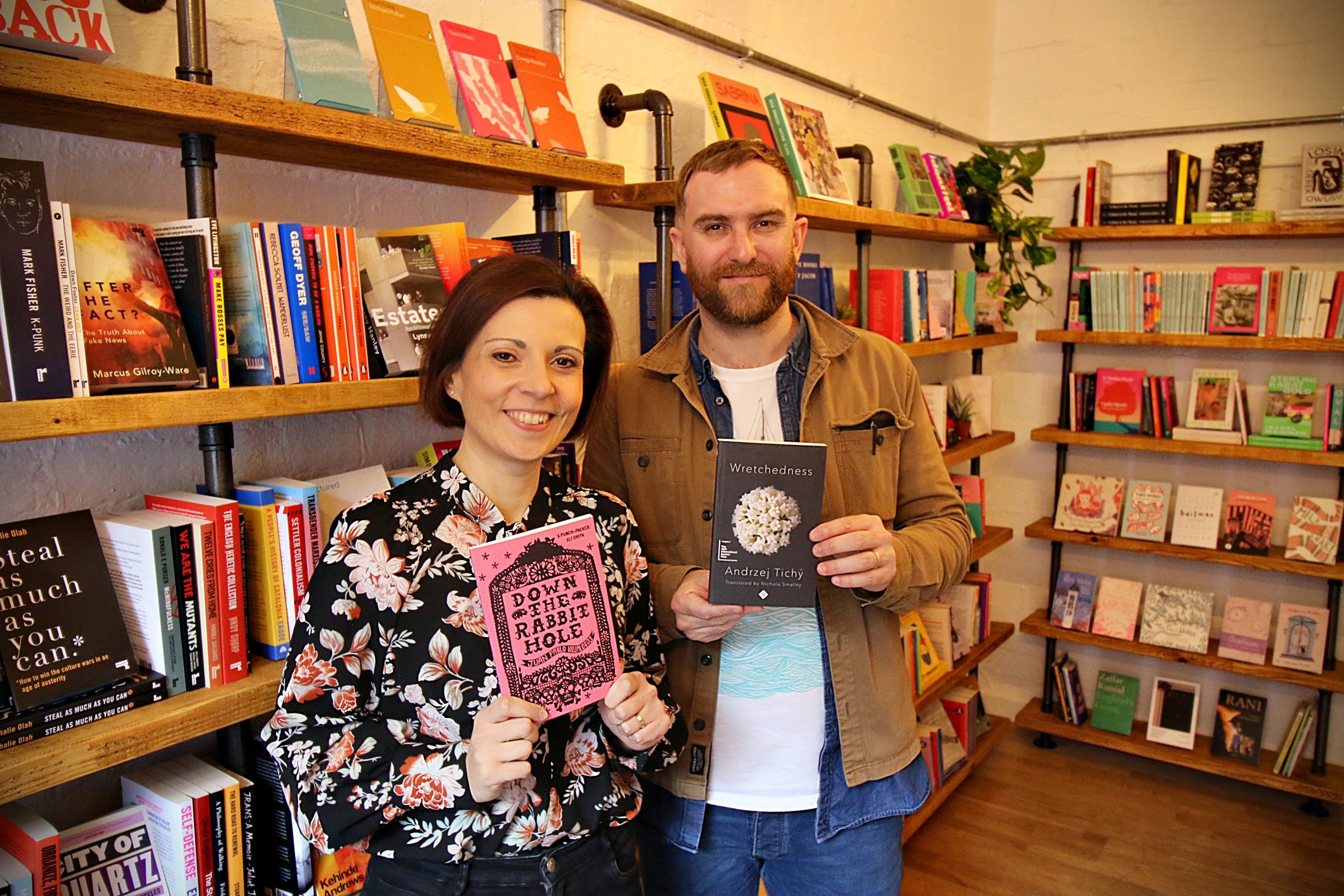 We’re excited to announce Voce Books as our latest Bookshop of the Month! Founded by Maria Lomunno Judd and Clive Judd and based in Birmingham’s Digbeth area, the bookshop aims to “give a voice to non-mainstream literature, translated fiction, working-class writers and books on politics, future-thinking and sustainability.”

On Twitter, the pair described the newly opened shop as clear, focused, and always evolving. “We want you to discover a brand-new bookshop each time you pay us a visit.” We caught up with Maria and Judd to learn more.

What do you think is special about Voce?

Clive: For a long time now, I’ve been particularly invested in the independent publishing scene. When I was at Foyles, working as Event Coordinator, it was a bit of a personal mission to get more exposure and promotion to books that offered new, radical and challenging perspectives of the world. So, I started working really closely with a whole range of independent publishers, all of whom were building their own dedicated following. When it came to thinking about Voce Books, it was a case of balancing our own desires for a contemporary bookshop with looking into the future a little bit and working out where reading interests were moving.

Luckily we felt the two were aligned so we moved to Birmingham, a city I know well, and a place we felt was the ideal setting for such an enterprise. Brummies are a quiet bunch, who don’t need the rest of the country’s approval to in order to operate. There’s a beautiful confidence in the way Birmingham quietly owns its own identity and with advocates such as our friend Joe Lycett not only talking up the city, but actually based here, it just felt like the perfect place to start this project we’ve been thinking about for years now!

What is special about Voce Books, we hope, is that you will find books that you just haven’t seen elsewhere in Birmingham, either because they are tucked away in ‘range’ or just not available from the shelves of other retailers. And with this, a confidence to mainline the work of independent publishers. You might not find the latest Richard Osman, but Waterstones is up the road, so…

We’re trying to create a tiny little haven for readers who don’t necessarily want to pin everything on a particular author, genre, part of the world, or what’s being rammed down their gullet on TikTok. And that is really exciting for us as curators of bookshelves and of bookselling in general. We’re radical in terms of our vision for bookselling as much as the books we stock!

If money was no object, what changes would you make to the shop?

Maria: If we had the money and a little more space in our shop, I would curate a large section of foreign language books, which is something that’s missing in Birmingham despite its multiculturality. It would be amazing to host book clubs in foreign languages too. Importing books is expensive (and more complicated than it used to be thanks to Brexit!), so money would be needed to keep them affordable for people. 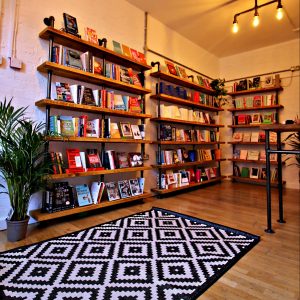 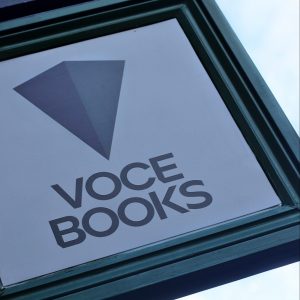 Clive: Since university, I’d always wanted to work for Waterstones, and had applied a couple of times without success. I loved books and, like pretty much everyone who applies for a job as a bookseller, had a sort of romantic idea of what the job entailed. In 2009, I finally got a Christmas temp gig at Waterstones Birmingham, and it went from there. I’m also a writer and theatre director, so bookselling for a long time propped up this rather precarious profession, but I started to realise that bookselling meant far more to me than a simple side hustle. I really cared about the publishing landscape and about the great books people should be reading.

I think the worst advice I’ve ever been given is that ‘if you have a fall-back plan, you’ll fall back on it.’ That just seems ridiculous to me. Having all of these different facets to my creative and working life, bookselling, writing, theatre-making, create a positive feedback loop that will ultimately make Voce Books a more interesting place to visit. I hope!

Maria: Foyles in Charing Cross Road is considered a mythical book haven abroad as well as here, so I already knew about it before moving to the UK. After that, it became one of my go-to places as a new, slightly lonely immigrant. When a job came up in 2014, I went for it without too many expectations, and I got it! I moved across branches and sections, and quickly realised that bookselling, perhaps even more than publishing, is the ideal job for a book lover!

What’s the funniest interaction you’ve ever had with a customer?

Clive: Not so much funny as deeply embarrassing…

I was working at Foyles’ second floor counter, in the Music and Drama section, when a woman came to the counter in a long coat and a beanie hat pulled tight over her head. Her hair sort of straggled out of either side of the hat and she, in my memory, had dark glasses on, too. She asked me whether she could sign her books but I didn’t clock who she was so I said, ‘Sorry. Do you mind telling me which books you’ve written?’ To which the author said, ‘Erm. ‘Just Kids…’ Patti. Smith. She was absolutely lovely about it, though, and we chatted a bit about the iconic Robert Mapplethorpe images on the front cover and her friendship with Sam Shepard, who is one of my all-time favourite writers. She loves bookshops and even worked in one of my favourites, The Strand in New York.

Maria: As the manager of the Drama section on the second floor at Foyles (were Clive and I met!), I came across a lot of actors (or aspiring ones) in search of the perfect monologue that would get them into drama school. The section would often become a rehearsal space, full of young people declaiming lines. I don’t know how many of those plays were eventually bought (not many I suspect) but it definitely was a peculiar thing to watch.

Clive: This would have to be Wretchedness by Andrzej Tichy, one of the best working-class novels I’ve read in recent years! The stream-of-conscious form is disorienting, and the narrative one of sad, cold, hard memories resurrecting themselves in the mind of the protagonist. But for me, the thing the novel captures better than anything is the way working class-consciousness disintegrates when you move out of this background into spaces dominated by the middle classes. The writer Cynthia Cruz talks about this movement across the class threshold as performing a death on your former self, and Tichy’s novel does this so brilliantly in the way we learn of the protagonist’s almost amnesiac relationship to his former self. It’s also a brilliantly rhythmic translation by Nichola Smalley.

Maria: Down the Rabbit Hole by Juan Pablo Villalobos, beautifully translated by Rosalind Harvey. It’s got the essential features that make me love a book: a very distinctive voice and a focus on the importance of language and the power of words to shape reality. It also reminds me of my own time interning at And Other Stories, definitely one of the most enjoyable and formative times in my career and life.

Clive: Easy. Alison Rumfitt’s trans-horror novel Tell Me I’m Worthless. This book has lingered so long in my memory, and it’s an absolute dream to recommend to customers despite its deep, dark subject matter. There’s a bit where Rumfitt splits the narrative into a dual perspective on the same, that I think is genuinely one of the most exciting things I’ve read in a new novel. A real provocation to the reader, and one of those moments as a writer myself where I’m left going ‘I wish I’d thought of that’! It’s also one of the most on-the-button analyses of the contemporary moment and the worrying horizon we might all be heading towards.

Maria: Strega by Johanne Lykke Holm, translated by Saskia Vogel and published by Lolli. I loved its gothic, dreamy world, the richness of the imagery, the language that approaches poetry. It’s the story of nine girls that move to the remote town of Strega to work at the Olympic Hotel, a place of past glory that is always, mysteriously, empty. In addition to the mystery, the novel also focuses on how the girls bond and on what it means to grow up in a body that is a mystery in itself.

Clive: I’d find a way to squirrel at least three books into my drenched suitcase! But the one at the top would probably have to be Austerlitz by the late, great W.G. Sebald. It has a sadness the likes of which I’ve only ever experienced in the songs of a band like Gravenhurst. I think you could read that book forever and never, ever reach its depths. Imagine writing something as good as that?! Wow!

Maria: Easy. The Master and Margarita by Mikhail Bulgakov. With all those amazing characters, multiple narratives and layers of meaning, it’s one of those novels that can be read and re-read without getting bored. You always find some new detail that didn’t seem to be there before.