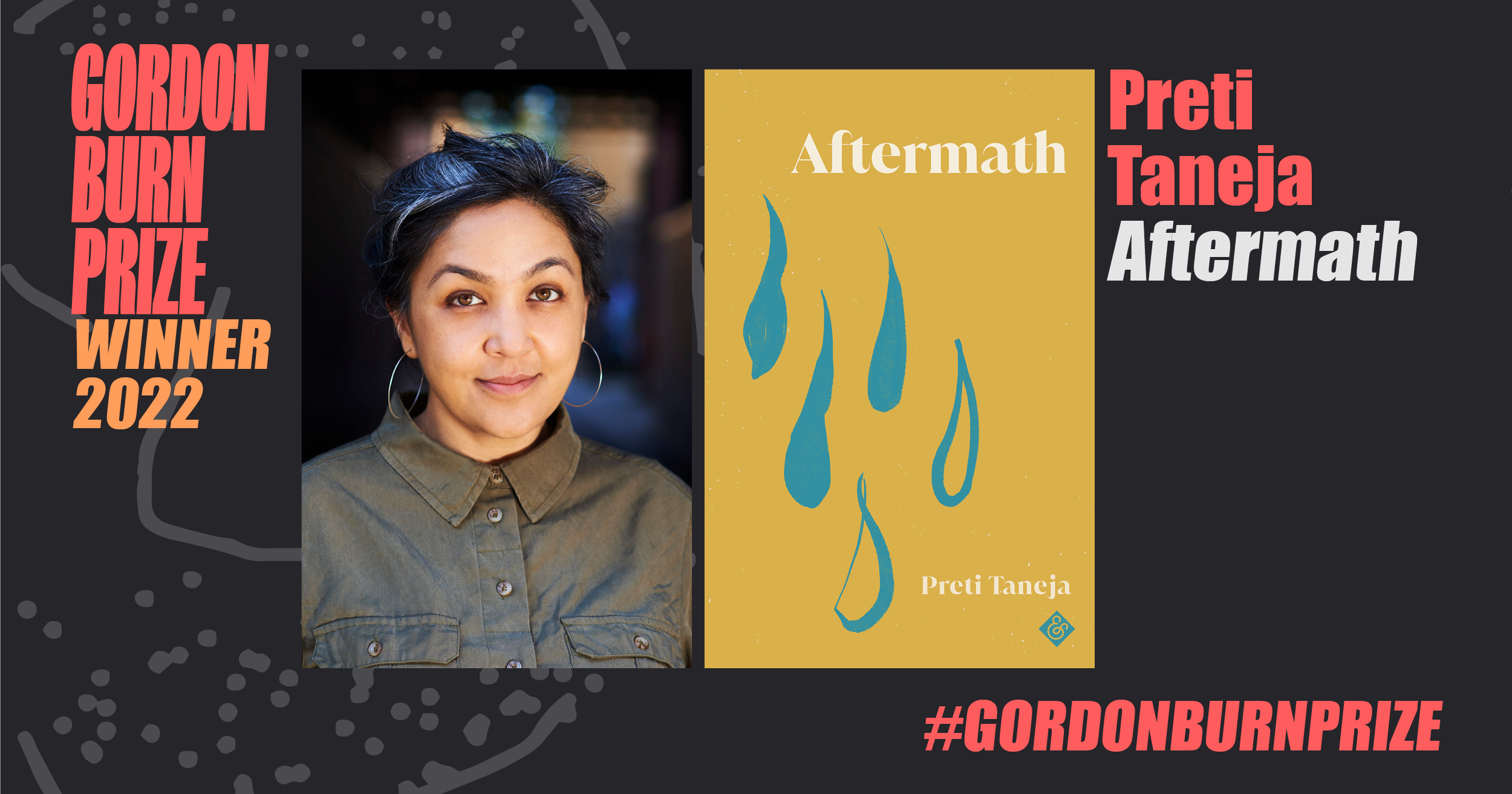 We are delighted to announce that Preti Taneja has won the 2022 Gordon Burn Prize for Aftermath.

On receiving the prize, Taneja said:

‘As a writer of fiction and nonfiction, Gordon Burn never shied away from the most difficult subjects. He was dedicated to finding the best form for his work, experimenting not only to achieve affect, but to explore the ethics of writing about those subjects through the writing itself. Aftermath is the hardest book I hope I’ll ever write. For some, it’s a controversial book. For others, it’s simply about the obvious harms of the endemic racism of a UK education system that does not teach colonial history properly; the biases in the school-to-prison pipeline and in the criminal justice system; and the corresponding narratives of policing, safety, and educational saviourism we cling to, but which fail to keep anyone safe. To have the book, which was written in the immediate aftermath of terrible violence, recognised as the winner in the tradition of Gordon Burn, among a set of writers whose work I so admire, means a great deal to me. I feel very grateful to my publishers, the readers, booksellers, New Writing North, the Prize and its judges for coming on this journey with me, and for not looking away.’

Published in April this year, Aftermath is an essential, world-expanding work that endeavours to firstly reckon with and then move beyond the language of terror, trauma, and grief following the Fishmongers’ Hall attack in London, November 2019. It is a deeply necessary and true reckoning with racism, Islamophobia, and state aggression today and we’re honoured to have published it in the UK and Europe.

Preti Taneja is a professor of World Literature and Creative Writing at Newcastle University. Her first novel, We That Are Young, a translation of King Lear set in contemporary India, won the 2018 Desmond Elliott Prize.

Launched in 2013, the Gordon Burn Prize rewards the year’s most dazzlingly bold and forward-thinking fiction and non-fiction written in English. Aftermath was selected by a panel of judges, made up of sportswriter and columnist Jonathan Liew, author Denise Mina (chair), broadcaster Stuart Maconie, artist and poet Heather Phillipson and writer Chitra Ramaswamy. The prize is supported by the Gordon Burn Trust, New Writing North, Faber & Faber and Durham Book Festival, a Durham County Council event.

A word from the judges:

Denise Mina, chair of the judges, said: ‘Aftermath is an extraordinary story of fractured narratives and lives that takes us into a world barely glimpsed in headlines and outrage.’

Jonathan Liew: ‘Aftermath stood out right from the start of the process: a book that knocks the breath out of you, and not always in a good way. It’s harrowing in parts; heartbreaking in others; humane throughout. But what impressed me above all was its artistic courage: the blurring of form and genre, the refusal to hold the reader’s hand or offer simple moral nostrums, the admission that while writing can expand our world, there are limits to what it can achieve.’

Chitra Ramaswamy: ‘I’m blown away by Preti Taneja’s writing: both the moral integrity of her approach and her fractured, minimalist prose. She has written a radical, profound, profoundly fractured and completely unique work of narrative non-fiction that has stayed with me. I haven’t read anything quite like it, and I can’t think of a more deserving winner of the Gordon Burn Prize.’

Heather Phillipson: ‘Aftermath is a brutal and bewildering attempt to think through the unthinkable. Preti Taneja sets out the highest possible stakes for herself as a writer and, by implication, for you as a reader. Incandescent and unnerving.’

Stuart Maconie: ‘A raw, highly personal perspective on a brutal and shocking event.’

‘Aftermath is written from the heart. I am both impressed by it and so grateful that someone has tried to make sense of the many issues surrounding what happened at Fishmongers’ Hall. There is so much truth in this slim volume.’

‘Stunning…[Taneja] turns a critical lens toward the way language shapes violence, suggesting that “power tells a story to sustain itself, it has no empathy for those it harms.” This poetic, urgent, and self-reflective work will delight fans of Valeri Luiselli’s Tell Me How It Ends and Claudia Rankine’s Citizen.’

‘Aftermath offers a personal, more in-depth perspective…pushing beyond an often binary understanding of such tragic events. In a structure of systemic atrocity, where the narrative set around violence is often left unquestioned, Taneja provides a unique context, interrogating the fallout of the terrorist attack.’

‘In Aftermath Taneja guides us through the “atro-city” – a place, “the outside world turned inwards”, as much as an event – and asks if together we can find a way out.’

‘It’s a book that evades definition, weaving together forms and genres, aware of the potentialities and limitations of fiction in the face of atrocity.’

‘Aftermath is a major landmark in British narrative non-fiction. It’s a beautiful and profoundly important account of creative writing teaching as a radical act of trust and interrogation of power; its anti-racist and abolitionist stance makes it a vitally important as well as deeply moving book to read now in these dismal days for the British political project. It is fearless in the way it shows its agonised workings as it unfolds into a complex map of grief.’

‘Astonishing. Radical, beautiful, broken, intimate. A surge. A yearning. A tribute. An indictment. You won’t read another book like this ever. Taneja’s attempt to wrestle with so much, with radical empathy, survivor’s guilt, politics – is a masterclass work of literary brilliance.’

‘Aftermath is a book that’s almost impossible to categorise: it sits in a tradition of bereavement literature; it sits with poetry. There is no fake moralising in its pages, just Taneja patiently walking us through the wreckage of unimaginable grief, noticing everything, lifting up the rubble, she makes us question everything we know and hold fast – a courageous and brilliant book.’

‘It takes a rare talent to respond to a shattering act of violence by reassembling the pieces in a way that refuses easy explanations or platitudes, but is illuminating, daring, world-expanding. Essential, in the truest sense of the word.’

‘A study, a song, a calling – Taneja’s work offers a crucial and radical account of control, conviction, complicity and trauma.’