Home Ampersand Bookshop of the Month: Exile in Bookville

This month’s Bookshop is Exile in Bookville, an independent bookstore in the Fine Arts Building on Chicago’s Michigan Avenue.

In addition to bookselling, founders Javier and Kristin also host various author events at their store, have cool merch for grabs, share their Spotify playlists and send a newsletter about it all. You can see it here and consider signing up!

What do you think is special about Exile in Bookville?

Intersection of music and books. We are constantly talking about both and a lot of what we play in-store often has to do with the vibe in the store at any given time. We often have moments like in the movie High Fidelity when Rob puts on “Dry the Rain” by Beta Band. What we play can have a magical effect on how folks shop our store.

If money was no object, what changes would you make to your bookshop?

Our office door breaks up a section of books in our store. I would love to have a hidden door/bookcase as the door to our office. Or new book tables that split in half and are on casters.

Javier: That is a long story. Basically, I worked for Tower Records on the video end at the main office in Sacramento in the late ’80s. I was just about to get fired and a friend of mine that ran the book division, which only sold small press titles to Tower book and record/video stores, said he would hire me. I ended up running the book warehouse but didn’t understand why we didn’t sell books by Stephen King and Dean Koontz. Our two wonderful buyers took me by the ear and said, “Look, stupid. Take this stack of awesome small press titles, read them over the weekend and decide if you want to keep running this place…stupid.” That weekend my life turned on a dime and I was hooked. I have been a disciple for the last 30 plus years.

Kristin: I met Javier as a customer at a previous bookstore that he opened. As time passed, we realized we had a ton in common and shared a vision of how we would run our own bookstore. Fast forward a few years and you have Exile in Bookville! 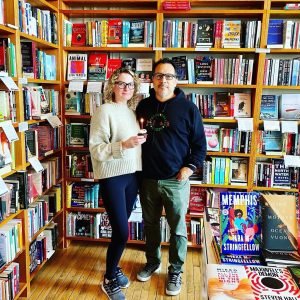 What’s the funniest thing you ever heard anyone say in the shop?

I love Kristin’s story. We took over a used bookstore and converted to all new books. A nice, seemingly normal man couldn’t get his mind around the fact that we sold new books exclusively. He had never heard of a “new” bookstore because he had only shopped at used bookstores.

I’m going to mention two. Rabbit Hutch by Tess Gunty. Read the prologue. If it doesn’t compel you to cancel your plans for the next 48 hours then I’m sure there’s something for you on Netflix. Another is Saint Sebastian’s Abyss by Mark Haber, Operations Manager at Brazos Bookstore. I have never learned so much about art and its criticism while simultaneously laughing so damn much.

Geek Love by Katherine Dunn. I never get tired of it and read it every eight years or so. There’s so much to explore and discover about ourselves with each re-read.