Home Ampersand All fictions are hallucinations: A conversation between Jessi Jezewska Stevens and The Book Hive 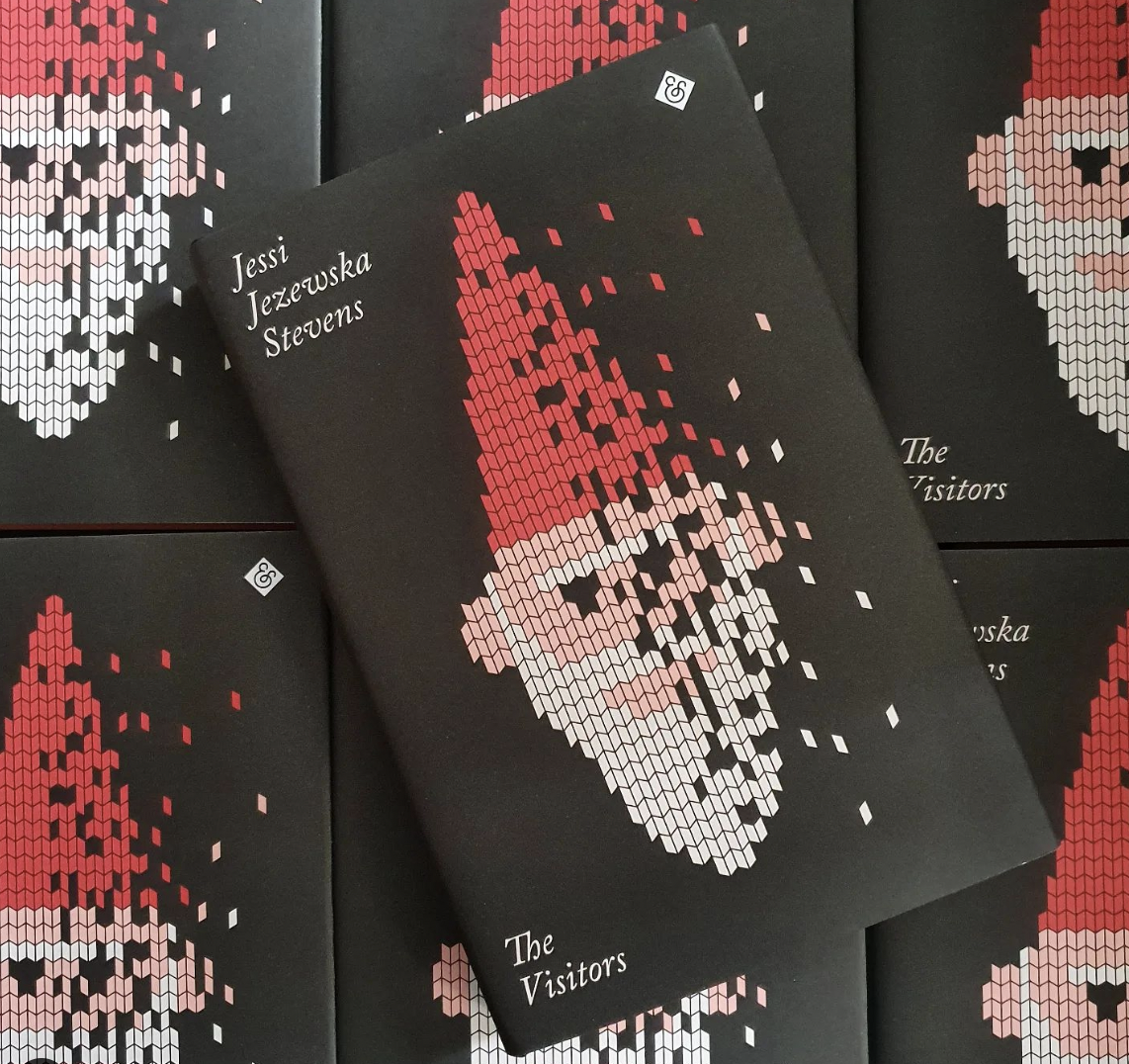 It’s Independent Bookshop Week and this year we’ve been proud to partner with The Book Hive in Norfolk and The Bound in Whitley Bay, North Tyneside. The Book Hive has been celebrating the publication of Jessi Jezewska Stevens’ The Visitors, in which the protagonist is visited by a collapse-obsessed gnome that speaks like Don DeLillo, by turning the shop into Gnome Man’s Land! If you’re in Norfolk and haven’t visited already, do pop down and get involved to win And Other Stories prizes and support you local indie!

The wonderful Book Hive staff also had some questions for Jessi about The Visitors. We’re pleased to host the conversation here:

The Book Hive: You write C’s breakdown in a very immersive believable way, and capture the sort of simultaneous buzzing and clarity of mental overload very well. Can you talk a bit about how it was to inhabit her while writing the book, and how it affected you to ‘be’ that character?

Jessi Jezewska Stevens: I admit I’m not one of those writers who believes her characters are real people – I’m much more affected by inhabiting the worlds and personalities that other people create. Maybe too much so. For example, I’ve been consuming a lot of Weimar-era books and movies recently, mostly because we’re living through another inflation crisis with a sense of impending doom, and at a certain point I realized that the things I was reading and watching had worked me into a state of genuine, acute anxiety: suddenly I feel like an inflation crisis. When I’m constructing my own worlds, I focus mostly on what feels true and immersive and consistent with the aims of the book – what else does a novelist have? – so I’m always glad to hear these qualities reflected in a reader’s experience. Achieving this takes a lot of problem solving and a lot of … I don’t know, trying to expand your soul. It’s a pretty all-consuming process, and if I really had to say how it affects me, I guess I’d say, from an outside perspective, my mind tends to be elsewhere. I forget stuff. I don’t leave the house. While drafting The Visitors, I remember one day looking down and realizing I’d somehow managed to spend the whole afternoon wearing the zip-up hoodie I always wear while writing upside down? Maybe writing novels just naturally looks like a breakdown.

BH: We were trying to think of other hallucinated characters in fiction, and one that sprung to mind was in Le Fanu’s short story ‘Green Tea’ (where a man is followed by a semi-transparent monkey and is convinced that it’s a creature from another realm latching onto him [it turns out to be, in one of the worst reveals in the history of literature, because he drank too much green tea]). And other deluded characters in fiction — George Harvey Bone from Hangover Square, Geoffrey Firmin from Under the Volcano, several of the characters from Gogol. And of course Huysmans’ great Decadent novel Against Nature – which you reference in the text and quote as a precursor to the story. Do you see C’s plight in that tradition? And do you think we are living through a great era of delusion and decadence?

JJS: I think all fictions are hallucinations – at heart I’m a realist, not in that the worlds I create show much verisimilitude to ours, but in that I believe in using fiction to “cast a spell” and “create a dream.”

American capitalism attempts similar ends through different means: it exists to create an illusion of attainable decadence at the direct expense of an enormous amount of avoidable suffering that takes place both here and abroad. It’s a system that sets people up to fail, then tells them it’s their own fault. I increasingly feel that the most accurate description of our age, then, is a feeling of being gaslighted, possibly to a breaking point, which is where we more or less meet C at the opening of the book. I might peg this as an age of gaslighting over decadence.

BH: You’ve said elsewhere in an interview discussing your previous (debut) book, The Exhibition of Persephone Q, that in modern life there is a “dominant narrative for what identity is: a set of algorithms.” In The Visitors, you draw links between the patterns of C’s weaving, computer code, the movements of markets, the behaviour of consumers, and C’s personality… After delving deep into this spin on reality (we’re all predictable data emitters; free will is overrated) what have you netted out? What’s your narrative for what identity is?

JJS: With The Exhibition of Persephone Q I was interested in the American state of permanent potential and reinvention. Ostensibly, you can redefine yourself and your “identity” at any time. But of course identity formation is also a social (and, increasingly, technological) process. I was also interested in how American identity, fraught as it is, means different things to different people in moments of national crisis.

With The Visitors I was more interested in modes of mass communication and the systems that govern our lives, and whether we still believe that we can express the public will through the usual channels of politics, protest, and art. I disagree that free will is overrated. I’d say instead that the collective belief that we can still change the sociopolitical environment we inhabit is under serious threat as the systems and crises that shape our lives feel increasingly out of reach of the rational democratic vote. At least that’s how it feels in the US.

BH: In a recent essay in Foreign Policy, you explored the idea that “if marketing narratives are explicitly designed to incite targeted action (the sale) and reshape reality (consumer perceptions), literary fictions, by contrast … tend to exist in competition with reality.” Is embracing the unreal – creating or consuming art, for example, or maybe (even better?) befriending a ghostly gnome that only you can see – a necessary act of resistance against hypercapitalism? Maybe even the only way to resist?

JJS: That’s an interesting interpretation. I think it’s fair to say C is a character who feels backed into a corner by the reality she’s in. She’s made a good effort to assimilate into the status quo, and it hasn’t worked out. She’s seizing whatever is left that’s still in her control: her imagination, her art, her own body, physical intimacy and touch. Maybe there’s something in this response that resonates with the idea of writing novels as well. Then again, as the reality of this “visitor” becomes ever more concrete, actual reality and a sense of consequence slips away from C. In that sense, I don’t know if it’s so much an act of resistance as an act of desperation – resistance by way of last resort.

JJS: Why anything? Why not?