Home Ampersand Writing community in Keeping the House: A conversation between Tice Cin and Max Porter 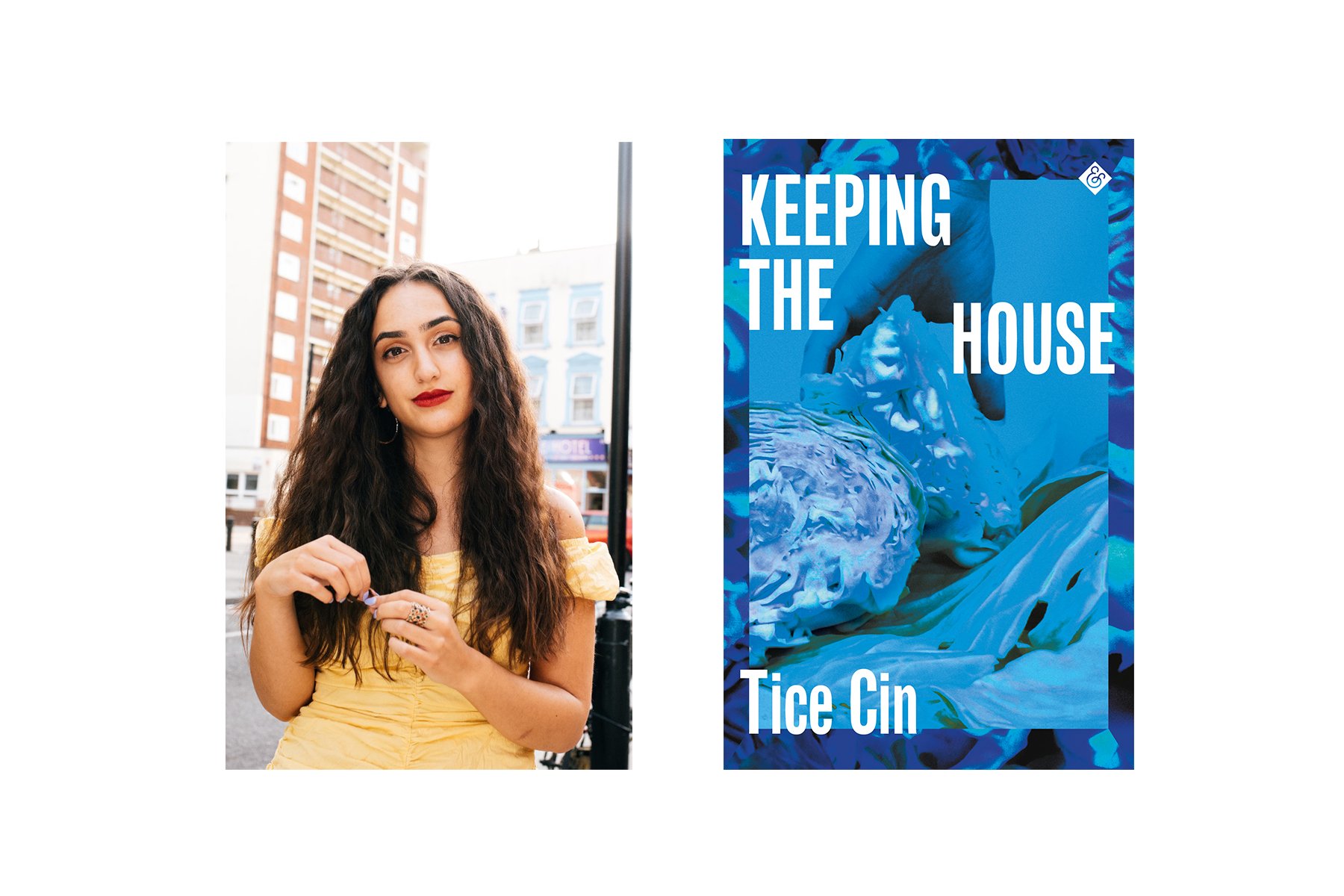 Originally published at Foyles, this discussion between Tice Cin and her editor Max Porter delves into the creation of Cin’s recently published novel, Keeping the House.

I hold in my hands a finished copy of your extraordinary debut novel, Keeping the House. A book totally unlike any other. The arrival of a major talent! But for you this is the culmination of many years work across different disciplines. Could you say a little bit about the origin stories of this work, and when you first knew it would be a novel?

Thank you Max, that’s beautiful. It has definitely been a long journey to get to this point. I come from various communities that are affected by PTSD in specific ways that are sometimes imperceptible to an outside eye. Three years ago I was just finishing my MA in English: Issues in Modern Culture at UCL. I had this module on Modernity and the City that made me want to write about my city in all its glitches. I wanted to do something a bit meta with Keeping the House and speak to those texts I’d studied, with light negging and all.

Something about PTSD is the way it places you outside of things, even when you’re firmly within them. I wondered what a book about people on the peripherals of society could look like, with all the exclusions involved. The single mums. The former addicts. The butchers turned dealers. Then I started interviewing some proper dons and their stories inspired me to create folklore for Tottenham, for North Cyprus, but mainly for kids who see too much.

We had some good discussions during the editorial process about writing others. About the hard work any writer should do when creating characters, portraying difference, inventing or recording lives similar or dissimilar to the writer’s own. When I’ve heard the culture wars waging recently I’ve often thought, ‘Tice gets this right’. Could you tell me a little bit about the social and linguistic universe of this novel and the work you did to get things right?

Damla’s character is almost a fly on the wall in some ways. She watches a lot of people outside of her field of reference and describes them but does not have access to their experiences in a full way. Through this, I think that became the mood that I wrote with, to use that outsider perspective as a linguistic tool and point of reference, never trying to inhabit the people I wrote about, but instead showing a specific narrator’s views of them. The old boy’s cafes that we see in the novel are in some ways a mirage of what the real ones are like. While I researched, interviewed those within, lived with, and have been in these spaces, they’re still not mine. I found that mindful distance rather than self-celebratory claims to complete expertise would undoubtedly be a better way to reflect an element of a community that I don’t feel 100% part of. I’m only 100% part of myself.

I’m very grateful that And Other Stories supported numerous sensitivity reads for different aspects of the book. I think that sensitivity reads from people outside of the publishing sphere are very important for getting an accurate idea of how certain phrases and moments come across. I tried my best to only mention things I personally knew too, I love cooking, so that felt a way that I could write about other cultures to my own in a way that was also respectful. One of the most enjoyable parts of writing this was re-cooking memory foods in various friends’ mum’s kitchens. Those families who bring you in and become the name of a place to you.

The translation within the book sometimes feels like a nod to the ways that I would like to feel carried into a conversation or frame of understanding. Emma Warhurst described her impression of it beautifully to me, as someone whispering in your ear at a party. As someone who personally grew up excluded from the wider Turkish community, that felt quite cathartic to write in.

I think the thing I love most about this book is the three-generational portrait of Makbule, Ayla and Damla. To me the intellectual as well as emotional heart of the book is in this family trinity of change, pain, ingenuity, care and memory. Did you begin with girlhood, centring Damla’s experience, and realise you needed to go way back? Or are the roots of the book in 1974, in the original trauma lived forward?

The roots I’d say are with Ayla. I wanted to have an understanding of the type of mind that would mastermind the cabbage plot, and then I had a clear picture of Ayla’s mum Makbule in the garden with her cabbages. There feels something restorative to me about the cycles of growing and tending to one’s space in the book. That also helped me to revisit the traumas of ’74 by creating windows into the skill pockets that help us hold onto memory and self after trauma. I connect the women together a lot in my mind with that thought towards memory, and through that cabbage…

Poetry and prose glide along side by side in this book, working together, sometimes slipping into each other’s skins. It’s a thrill for the reader. Is it also a thrill to write that way? And do you think your future novels will be this way, or was it bespoke to the Tottenham Cabbage Epic?

I love the thought of that. I do imagine the two prancing around in the dark trying to rob each other’s socks. It is such a thrill to write that way. Your talk at Edinburgh International Book Festival where you mentioned the tyranny of genre really struck me because that really is embedded into a lot of the industry, from funding applications to marketing structures. It’s limiting. There’s this mentality that moving between forms, styles, and the like is simply an author emptying out a bag of marbles to show off the shinies. There needs to be space for the fact that the book chooses for us too, and often it has a cultural purpose too, rather than embellishment. I enjoyed writing Keeping the House because once I had an internal logic that would apply to the use of poetry or more, it came easier and with comfortable timing. I see myself writing in a similar way in future novels, just with a bespoke set of rules I’ve set myself for each project.

You’re a very collegiate writer and artist. I know we share some feelings about the writer and the world, and the importance of being communal, sharing the space, bringing up others. Can you share the names of some people who are making interesting work, inspiring or engaging you (in any art form) at the moment?

That’s definitely something that I’ve always enjoyed about our conversations. So many great recommendations from you! I do think that a lot can be done when we’re ‘paying things forward’ or simply allowed the space to enthuse about the people who bring us joy in our art.

Yu Yoyo is a poet from Sichuan who inspires me in the way she writes about loneliness and city spaces, in particular, her poem ‘Empty Town‘. I’m struck by the work of Richard Dixon AKA lostintottenham, who is a childhood friend who shot my book cover. His photography and music inspire me a lot because it feels so intrinsically connected to the fractures in north London that artists normally try to veer away from. My fwrd mtn family who encourage experimental approaches to art-making. I think that the digital archives (often by way of gaming universes) that artist Danielle Brathwaite-Shirley creates are revolutionary and much needed. I also think a lot about the work of my friend Annie Hayter, a poet who really leans into the oddities of our interactions with one another and who also runs a fantastic series of workshops on tenderness. As cultivators of experience, I look to The Spectacular Empire as a brilliant space. They are an infrastructure for forward-thinking Black art and music. I especially love how Gaika celebrates those he rates and the beautiful aesthetics he builds to platform his community. Another person who I really admire is Shireen Ramezani aka Namak. The way she blends grime with UK funky and slick foley in her productions is so fresh. My friend Pietro Bardini who always invents cool sound toys and is one of the founding members of Design Yourself Collective. Gboyega Odubanjo. Spooky Bizzle, so prolific! Kareem Parkins-Brown. Smoking Tigers Collective.

Last question is pure food. If we met for dinner and wanted to celebrate this book in three (or more) courses, tell me what we’d eat…

Now I’m hearing my belly talking as I have a think about this.

Summer garden style. I imagine the dinner to be food that just keeps coming. Jerk chicken smoking from the drum, glossy from Red Stripe getting dashed over it. A deep dish of Turkish rice smacked down with a big wooden spoon bobbing out of it. Fried plantain. We’d have to have lahana sarma on the menu, so a big silver tray of various wrapped and stuffed vegetables, from cabbage to courgette flowers. A spicy purslane salad, cut during the day. Ending on fruit, from yenidünya (loquat) to watermelon.