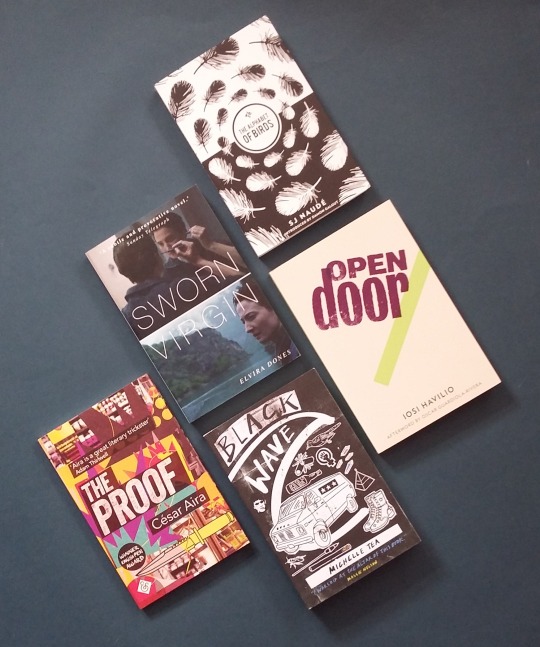 Following on from our guest post from Claire Browne of Serpent’s Tail on being LGBT+ in publishing, we’re highlighting a few of our favourite recent and forthcoming books written by LGBT+ writers or about LGBT+ themes – some published by us, some from other indie publishers, all necessary.

When Hana’s dying uncle calls her back from the city to the family home in the Albanian mountains, he tries to marry her to a local man who could run the household. Unable to accept the arranged marriage and determined to remain independent, Hana’s only option is to follow tradition and vow to live the rest of her life in chastity as a man – and so Hana becomes Mark. For a sworn virgin, there is no way back.

Years later, Mark – now a raki-drinking, chain-smoking shepherd – receives an invitation to join a cousin in the US. This may be Mark’s only chance to escape his vow. But what does he know about being an American woman?

This are true, angry and, most of all, inspiring words we can all take something from in troubling times.

Black Wave by Michelle Tea (And Other Stories)

Grungy and queer, Michelle is a grrrl hung up on a city in riot. It’s San Francisco and it’s 1999. Determined to quell her addictions to heroin, catastrophic romance, and the city itself, she heads south for LA, just as the news hits: in one year the world is Officially Over. The suicides have begun. And it’s here that Black Wave breaks itself open, splitting into every possible story, questioning who has the right to write about whom. People begin to dream the lovers they will never have, while Michelle takes haven in a bookshop, where she contemplates writing about her past (sort of), dating Matt Dillon (kind of), and riding out the end of the world (maybe).

New from Michelle Tea, novelist, essayist, and queer counter-culture icon, Black Wave is a punk feminist masterpiece and a raucously funny read for everyone … except, perhaps, for Scientologists.

In this breathtakingly inventive autobiographical novel, Eileen Myles transforms her life into a work of art. Suffused with alcohol, drugs, and sex; evocative in its depictions of the hardscrabble realities of a young queer artist’s life; with raw, flickering stories of awkward love, laughter, and discovery, Chelsea Girls is a funny, cool, and intimate account of how one young female writer managed to shrug off the imposition of a rigid cultural identity.Told in her audacious and singular voice made vivid and immediate in her lyrical language, Chelsea Girls weaves together memories of Myles’s 1960s Catholic upbringing with an alcoholic father, her volatile adolescence, her unabashed “lesbianity,” and her riotous pursuit of survival as a poet in 1970s and 80s New York.

The Proof – César Aira tr. Nick Caistor (And Other Stories)

Marcia is sixteen, overweight and unhappy. One day, as she’s walking down a Buenos Aires street, she hears a shout: ‘Wannafuck?’ Startled, she turns around and is confronted by two punk girls Lenin and Mao. She’s soon beguiled by them and the possibilities they open up. But the two have little time for a philosophical discussion of love: they need proof of it, and with their own savage logic the duo, calling themselves the Love Commando, hold up a supermarket as the novel climaxes in an unforgettable splatter-fest finale.

Armando is one of the most renowned therapists in São Paulo. One of his patients, a 17-year-old boy by the name of Sergio, abruptly interrupts his course of therapy after a trip to New York. Sergio’s cursory explanation to Armando is that he has finally found his own path to happiness and must pursue it.

For years, without any further news of Sergio, Armando wonders what happened to his patient. He subsequently learns that Sergio is living a happy life in New York and that he is now a woman, Sandra. Not long after this startling discovery, however, Armando is shocked to read about Sandra’s unexpected death. In an attempt to discover the truth about Sergio and Sandra’s life, Armando starts investigating on his own.

Sergio Y. is a unique and moving story about gender, identity, and the search for happiness.

When her partner disappears, a young veterinary assistant drifts from the city towards Open Door, a small town in the Pampas named after its psychiatric hospital. Embarking on a new life in the country, she finds herself living with an ageing ranch-hand and courted by an official investigating her partner’s disappearance. She might settle down, although a local girl is also irresistible …

This evocative, atmospheric book makes a quiet case for the possibility of finding contentment in unexpected places – and tells it in unexpected ways.

A timely and genre-bending memoir that offers fresh and fierce reflections on motherhood, desire, identity and feminism.

At the centre of The Argonauts is the love story between Maggie Nelson and the artist Harry Dodge, who is fluidly gendered. As Nelson undergoes the transformations of pregnancy, she explores the challenges and complexities of mothering and queer family making.

Writing in the tradition of public intellectuals like Susan Sontag, Nelson uses arresting prose even as she questions the limits of language. The Argonauts is an intrepid voyage out to the frontiers of love, language, and family.

The Alphabet of Birds by SJ Naudé tr. by the author (And Other Stories)

If death comes to a loved one, can we grieve alone? When all around is in ruins, can we confine our lives to one beautiful room constructed out of art, or love, or family ties? And when the words we know prove inadequate, can we turn to the language of birds?

In an arty mansion in Milan’s industrial zone, two men are shown one of the last remaining Futurist noise machines – an Intonarumore – and a painful old truth surfaces. A musician travels to three continents to see her siblings before returning to Johannesburg; her home is plundered every night around her as she composes a requiem. A man follows his male lover from London to Berlin’s clubbing scene and on to a ruined castle in which the lover’s family lives. He is looking for an antidote.

The protagonists in SJ Naudé’s collection are listening out for answers that cannot be expressed. Offering fresh perspectives on gay, expat and artistic subcultures and tackling the pain of loss head on, Naudé’s stories go fearlessly and tenderly to the heart of our experiences of desire, love and death.

Jack Rose begins his apprenticeship as a rent boy with Alfred Taylor in the 1890s, and finds a life of pleasure and excess leads him to new friendships — most notably with the soon-to-be infamous Oscar Wilde. A century later, David tells his own tale of unashamed decadence while waiting to be released from prison, addressing his story to the lover who betrayed him. Where their paths cross, in the politically sensitive 1950s, the artist Colin Read tentatively explores his sexuality as he draws in preparation for his most ambitious painting yet — ‘London Triptych’.